The King of the Curse 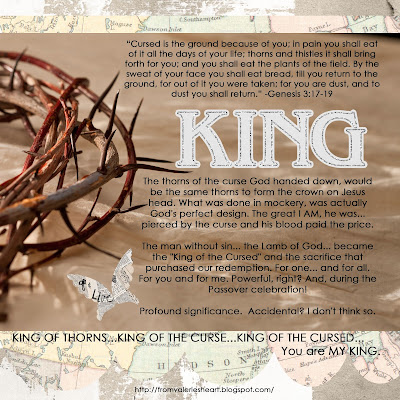 Daily Gratitude Year 5-Day 63: Today, I am grateful for the "King of the Curse".

As a child, I hated when Easter rolled around. I grew up understanding that Jesus died for my sin. That the weight of that thorny crown... pushed down...until blood ran down, was for me.

It made my stomach sick and unbearable to relive every spring. (Remember, as children, we feel the world revolves around us.)The nails, the beatings, the suffering and the whole shabang... was partly my fault. I wasn't solely responsible... but I was born into the curse, with my own desperate need for redemption. It goes all the way back to man's original sin.

It is God managing the mess of free will and our human choices... to save the relationship... we left broken. Oh yes... the "me" in the "we" is clearly there.  Evidence in scripture:

And to Adam he said, “Because you have listened to the voice of your wife and have eaten of the tree of which I commanded you, ‘You shall not eat of it,’ cursed is the ground because of you; in pain you shall eat of it all the days of your life; thorns and thistles it shall bring forth for you; and you shall eat the plants of the field. By the sweat of your face you shall eat bread, till you return to the ground, for out of it you were taken; for you are dust, and to dust you shall return.” -Genesis 3:17-19

Thorns are part of the curse. They represent the curse.

Man still works the land to eat bread. There are thorns and thistles... as a farm girl... we walked the beans and hoed the rows to remove the weeds that would hurt the crop. Now, we use chemicals, but back then... we felt the curse up close and personal. I did not enjoy walking beans. The year the weed known as "nightshade" appeared, I grew to understand Adam's curse up close and personal.

In Sunday School, my teachers did a great job of helping me understand my sins resulted Christ's sacrifice. Somehow, my guilt weighed so heavy, that I missed that the power of his choice and the depth of His love. It is his choice to be the sacrifice that completes our purchase and redemption. Propitiation is the word. Leaving us debt free.

God cast Adam and Eve from the garden. They felt the punishment. Yet, he went with them. He would not abandon them to all of the consequences of their free will. A Father's love struggles with finding the proper balance between tough love and compassion so children learn, grow and thrive.

God's love did not leave Adam and Eve... or their children...and their children's children. He continued, in relationship with them, even when they struggled... even when he was angry. The "big picture love story" continues, written through the generations of humans who seek him.

Remember Moses? Forty years Moses lead the wandering Hebrew people in the desert. God provided their life sustaining water by taping a rock, daily bread as manna from heaven and quail, when they could not provide for themselves under the desert circumstances.

Poor Moses. Who could blame him for losing patience with the whiners and complainers? Still, his fit of temper... the angry striking of the rock that provided water... it cost him big. It was Joshua who would finally lead the Israelites into the promised land. Moses sinned in his anger ... and he lost the privilege of completing the mission. Even for a faithful servant, like Moses... "there were thorns" as a result of sin.

So, Moses died and Joshua took the lead. He starts out with these words of hope:

Have I not commanded you? Be strong and courageous. Do not be frightened, and do not be dismayed, for the Lord your God is with you wherever you go.” -Joshua 1:9

Fast forward to Jesus. For 400 years between the Old Testament and the New Testament, God was present but silent. He lets them wrestle and struggle with some of the fall out from their bad decisions. He gave them some thinking time to get familiar with the scriptures.

What did God's people do? Many found refuge in religion and missed the importance of the relationship. Some sought other religions and worshiped false gods. For some, the church became big business and with that came power. With power came arrogance and loss of integrity in many cases. Some remained faithful to the scriptures, but many found money and power more desirable.

A few remained tender to God's spirit and tried to trust his heart, even in the trials and struggles. They kept his ways and sought his face. That is where God found the sweet woman-child Mary and her kind, hard-working carpenter, Joseph. They were among the faithful. They were chosen.

Joseph and Mary would marry and raise the boy, in the shadow of gossip and speculation. And that boy would grow in strength and wisdom... and eventually take on the sins of the world. How do you prepare a child for that task?

Jesus grew up with wood, the power of the hammer and the nails that brought the pieces together to make something beautiful. He had, likely, experienced the pain in the process. Splinters. Joseph accidently striking him with a hammer as he taught him the trade. I don't know if Jesus avoided all pain as a child. I know that he bore it all on the cross.

He would become the "King of the Curse", as Jonathan Cahn explains it in "The Book of Mysteries" on Day 25.

The thorns of the curse God handed down, would be the same thorns to form the crown on Jesus head. What was done in mockery, was actually God's perfect design. He was pierced by the curse and his blood paid the price. The man without sin... the Lamb of God... became the "King of the Cursed" and the sacrifice that purchased our redemption. For one... and for all. For you and for me. Powerful, right? And, during the Passover celebration!

Accidental? I don't think so.

There is even more to uncover if we dig a little deeper. Crowns are worn by kings. Crosses were for criminals. The mockery of the sign they placed above his head cast the ripple of decision into eternity. Accept or deny? It's the big choice.

Look at this passage from Matthew 27:11-

"Now Jesus stood before the governor, and the governor asked him, “Are you the King of the Jews?” Jesus said, “You have said so.”

You never win a word war with Jesus. Jesus answered honestly, simply and without an air of defiance.

Then, look what happened next. This gives me the chills down my spine, as one cannot look at this and deny that God's hand was in every step Jesus took to the cross. Get ready to fasten your Bible seatbelt, for the Word of God just might blow you away. That is how I felt as it all came together for my simple understanding. Let's go to John 19:

Pilate also wrote an inscription and put it on the cross. It read, “Jesus of Nazareth, the King of the Jews.” - John 19:19

The King of the Jews... declared by the government of the day. The chief priests are not going to like that declaration by those in charge.

Many of the Jews read this inscription, for the place where Jesus was crucified was near the city, and it was written in Aramaic, in Latin, and in Greek.- John 19:20

The King of the Jews... written in ALL of the common languages of the day so ALL would understand. The sign shouted, "Don't miss this people. All people pay attention."

Jesus did not deny his birthright or his true identity. He just asked his age old question in his masterful response; "Who do you say that I am?" Pilate's answer, "King of the Jews".

They did NOT want Jesus declared their king for all to see in every familiar language.
The chief priests wanted to make a mockery of him... but please do not declare him our king.

But, Pilate's wife was a believer. She didn't want Jesus crucified. Pilate did some quick thinking. He was pressured on all sides, but he had an out, you can read it in Mark 15.

During the Passover feast, the government offered the chief priest the choice of one prisoner to be released, as was the custom. Pilate hoped they would ask for Jesus, but they didn't. They chose the murderer, Barabbas, instead. They cried out for Jesus to be crucified.

Pilate was done with them! Let them have their way.

"So when Pilate saw that he was gaining nothing, but rather that a riot was beginning, he took water and washed his hands before the crowd, saying, “I am innocent of this man's blood; see to it yourselves.”  And all the people answered, “His blood be on us and on our children!” Then he released for them Barabbas, and having scourged Jesus, delivered him to be crucified.  -Matthew 27:24-26

Wow, right?  Look what they cried out with regards to Jesus. “His blood be on us and on our children!” Oh, it was. It is. And, there is victory for those who claim it their own.

It will continue to be the blood that redeems, saves and seals our adoption as children of God. Once again, restored to relationship. Offered to all who bow and call him King. We offer our broken mess to the one who longs to restore our souls and our lives.

He wore our thorny crown of sin and came out victorious on the other side of the grave, so we might enjoy new life and have it more abundantly.

He is our "enough" but he is so much more... this King who would let nothing separate those who long to know him as Lord.

Today, I am grateful for the "King of the Curse".
Posted by Valerie's HeART at 10:49 AM