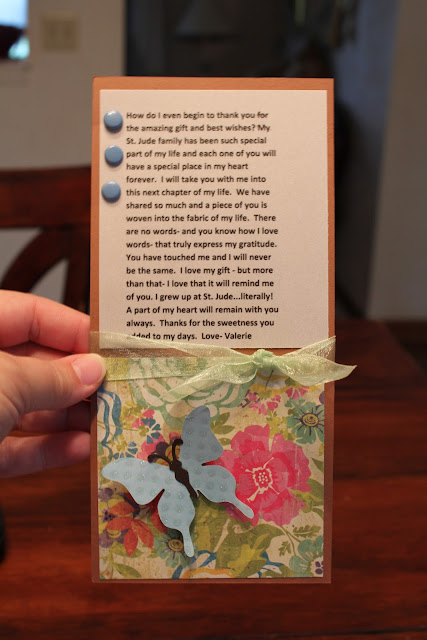 My "Thank You" card for my St. Jude Team...
Card details...Flower Paper form Hobby Lobby(not sure of brand), Cardstock cut to fit an A-2 envelope, Die Cut is a Sizzix die, butterfly paper glitter paper is Making Memories and the body is  from Michaels Recollections line the metallic pack.  A quick shout out - Michaels Recollections line is perfect for die cutting in Cricuts or other machines.  Clean and a nice weight - it cuts like butter.  Brad's and ribbon from my stash to dress it up.

My ramblings for today...20 years of family support and social service at the St. Jude Midwest Affiliate in Peoria, IL is where I "grew up."  I was a young mother...Chase was not even two yet...when John McCallister convinced me to interview for the position of  counselor at St. Jude. I was happy with my part time position at Peoria Alternative School but in the end - that I said yes.  I actually worked two part time jobs until Walker was born - keeping Wednesdays home and summers off from the school District.

20 years in the "valley of the shadow of death" with cancer's youngest warriors and their families.  I am humbled that they allowed me to share their path and I will never be the same for the experience.  Traveling Light - is  a book by Max Lucado that dissects the 23 Psalm.  He writes about a young man and his daughters riding back from the cemetery after burying their mother. A huge semi truck passes them throwing a shadow over the car and making it dark.  He uses that to draw a picture of the "valley of the shadow of death".  The shadow cannot hurt us.  It can be scary - but in itself is nothing to fear- although it is human nature to do just that.  The book was given to me by a friend from church after my sister died.

Today is the 17th anniversary of her death on Kadena Air Force Base in Okinawa and she is on my heart. 17 years ago today - the Air Force Chaplin arrived in Clifton where my parents were visiting my brother's office.  He was looking for directions to our farm and found them there together...just as I know God allowed for them to have each other when the letter was read. She died just two weeks before her wedding day.  I was forever changed by her loss, "Traveling Light" and 20 years in the field of pediatric cancer. April died just over a year after we had lost out niece, Jennifer,  in a car accident.  Loss changes us but it has it's gifts. It allowed me new insights into my work on what it feels like to have your family forever changed by a loss.

Life seldom turns out the way we expected and the best plans can fail.  Still, we can "dance in the rain" and hold on to joy because we have a hope that "moths and rust cannot destroy".