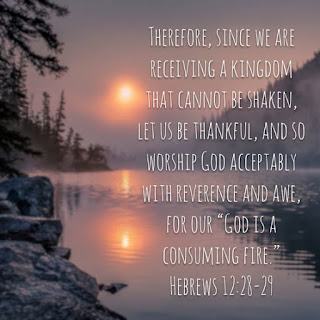 Into every life a little rain must fall. Farmers and gardeners know the necessity of the right rain at the right time. I remember Dad saying, "Smell that? That's a money rain." I am sure he heard  the phrase from his dad. A good crop could become magnificent, with the a perfectly timed summer rain.

Sometimes, the rain comes too hard and too fast... or not at all. How easy it is to let our spirits be shaken and our troubles to weigh us down!

Twila Paris has an old song,"Do I Trust You ".  It was sung at my sister's funeral. There is a phrase, "Shaken down to the cavity in my soul." that I still hold on to for the perfect measurement of sorrow and grief. As deep as our souls, that is the depth pain and sorrow can go. But He never, ever, even once abandons his children. We can reject to the ends of the earth... but when we call out, he finds us there.

Believers aren't promised an easy path, or even the answers. We are promised, for those who choose Him, that we are a part of an unshakeable kingdom. How awesome is that? Our little lives are "short stories" that he longs to weave into the "bigger picture" of His redeeming love for humans.

We can be "book smart", know the Bible well and know the right expressions, but in the end... he wants to know if we trust Him and his sovereign ways. Here is a little more of the lyric.

"I know the answers, I've given them all
But suddenly now, I feel so small
Shaken down to the cavity in my soul

Good lyrics... old and soul seeking, from a broken heart. Do I trust  Him?

Do I meet and greet Him daily with prayers of thankfulness? Do I worship him with awe and a holy fear? Do I recognize that when I come to Him in prayer, I am standing on holy ground?

Since we are receiving a Kingdom that is unshakable, let us be thankful and please God by worshiping him with holy fear and awe. For our God is a devouring fire. -Hebrews 12:28-29

Do I offer up my life as an offering that my Lord can set of fire and consume for his glory?
Not always. My own agendas get in the way. Like the Burger King "hold the pickle, hold the lettuce" jingle, I like to have it my way.

At times, it takes an incident of earthquake proportions to get my head bowed and my eyes seeking his face. In grasping to understand the unshakable kingdom as it relates to us as individuals, I always think of this amazing passage from Elisabeth Elliot's "Through Gates of Splendor": It was from her husband Jim's journals that she read after he died.

"May the Lord teach us what it means to live in terms of the end.” “He makes His ministers a flame of fire.  Am I ignitable?  God deliver me from the dread asbestos of ‘other things.’ Saturate me with the oil of the Spirit that I may be a flame.  But flame is transient, often short-lived.  Canst thou bear this, my soul – short life? In me there dwells the Spirit of the Great Short-Lived, whose zeal for God’s house consumed Him.  ‘Make me Thy Fuel, Flame of God.’”
"God, I pray thee, light these idle sticks of my life and may I burn for Thee.  Consume my life, my God, for it is Thine.  I seek not a long life, but a full one, like you, Lord Jesus.” -Jim Elliot

Who was Jim Elliot?
Jim Elliot, Nate Saint, Pete Fleming, Ed McCully and Roger Youderian took the gospel to the jungles of Ecuador, to share the Good News with native Huaorani (Waodani)  people.Their love for Christ fueled their quest. They flew together in a bush plane and stood together unshaken to face the native's spears that would end their lives.

On January 8, 1956, ten Huaorani warriors, killed Jim Elliot and his four companions. The men were armed, but did not take aim against the Huaorani. For Jim, it is almost as if he had already reconciled with God that his life might be cut short for the gospel. He was willing to die that others might have new life. But the story does not end there.

Jim's wife, Elisabeth and Nate Saint's sister, Rachel,  returned to the jungles, to carry on the mission they started with their husbands. They eventually made peaceful contact. They told the natives of a loving God who hears their prayers and sent his son to die so they might live.

In June 1965,  Nate Saint's son, Steve or "Babae", as he was called by the tribe, was baptized in the Curaray River by Kimo and Dyuwi, two of his father's killers who had since converted to Christianity. Great but the story doesn't end there.

Steve Saint brings the "unshakable kingdom" into focus with his reflection on his Dad's sacrifice: “I would rather have a dad who died serving Christ than one who had no knowledge of Christ.”  The evidence is clearly displayed when Steve wraps his arms around the aging warrior who was a party in his father's death and affectionately refers to him as "Grandfather".

Long post... but "unshakble" is tough to put into words.

Yes. His is an unshakable kingdom.

Today...I am grateful for the unshakable.
Posted by Valerie's HeART at 1:24 PM