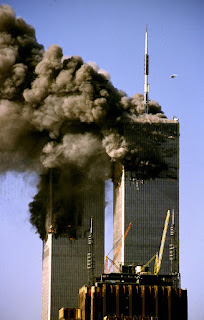 Daily Gratitude Year 9 - Day 253: Today, I am grateful for the memories of 9/11... a season when we prayed together, pulled together and held hands against evil.

It's been 20 years since the day "the world stopped turning" as the country song stated. We stood frozen in shock, horror and grief filled our eyes and our hearts. It was an attack on American soil, unlike any we've experienced before.

At the center of commerce in NYC, at the Pentagon and over a field in Shanksville, Pennsylvania the terrorist attack unfolded. Disbelief, anger and fear filled the heart and mind of a nation. For a season, we pulled together to help, to offer hope and to share the stories of that day, so that we could etch them on our hearts so we might never forget.

In the 9/11 crisis, we celebrated the firefighters, police officers and other first responders who cared for the injured, offered comfort to the dying and showed gentle respect for the dead. We saw strangers pull together to evacuate as many as possible from burning buildings and falling towers. We heard a prayer and a "Let's roll." from a phone message left by the brave men who tried to take back Flight 93 from the hijackers. The plane crashed, never hitting its intended target. 45 died, but it is likely many more were saved.

Generations before us had the attack on Pearl Harbor and D-Day etched in their memories. For current generations, "Where were you on 9/11?" You do not need to add the 2001 for clarity. 9/11 says it all.

Twenty years later, the emotions are still real as we remember. So many Firefighters, Police and other First Responders did not live to tell their stories, but some of the people they saved will keep their memories forever strong. One firehouse in particular was full of firemen waiting on the arrival of new babies. Some of those babies would never be held in their Daddy's arms.

So much has changed since that day. Flying has never been the same. We are more suspicious of others as we travel at home and abroad.

I think the stories that stick with me the most are some of the miracles of people who were not where they usually are at 7:45 am on a Tuesday morning. They were at Doctors appointments and dental cleanings. They were at preschool drop offs, eye appointments and stuck in traffic jams. They missed their flights. They went to the bathroom and missed the plane landing in their Pentagon office where everyone else perished. The stories seem like miracles. Being spared when others perished, left people feeling grateful, humbled and in awe of the sequence of events that lined up perfectly so their lives were spared.

One of the most haunting memories for me was seeing people jump from the burning buildings, when they knew they had no way of making it out. I can't imagine making that decision.

Twenty years later, I can't help but recall the sense of unity we shared across these United States of America.  NYFD and NYPD shirts and hats were popular Christmas items that year. We stood together. We prayed together. We did our best to honor the lives lost. We put together remembrances.

"if my people who are called by my name humble themselves, and pray and seek my face and turn from their wicked ways, then I will hear from heaven and will forgive their sin and heal their land.- 2 Chronicles 7:14

It is a passage of promise and hope, but we cannot ignore the call to humility and prayer. God is not tolerant of human arrogance.

Today, I am grateful for the memories of 9/11... a season when we prayed together, pulled together and held hands against evil.