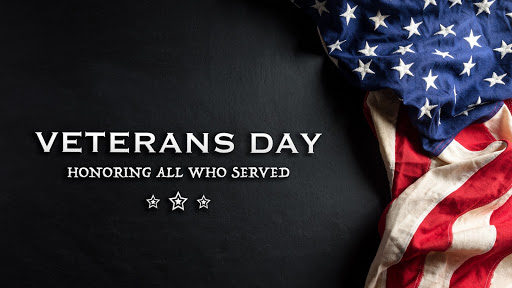 11...11...11... Veteran's Day is on November 11th  each year. On the eleventh day... of the eleventh month... at the eleventh hour of 1918, the armistice was signed . The cease fire would formally end the major hostilities of World War 1. It was called Armistice Day until 1954, when it was renamed to include all veteran's who have served in any branch of the US military.

Two of my great uncles died in WWI from illness, not in battle. Uncle Mel and Dad were both Army. Uncle Mel served during the Korean War and Dad served in the Army Reserves. My little sister, April, chose the US Air Force and fulfilled her dream of going to Okinawa. Her fiancé, Mark, was a Marine. My cousins, David and James, followed in the footsteps of our beloved Papa Chet choosing the Navy for their service. David and James are career Navy and our family is so proud of their service. That is just my side of the family. Our great nephew, on Randy's side, is finishing his Army basic training this week, I believe. Red, white and blue... through and through.

Our service men and women sacrifice so much. They miss holidays, birthdays and special events because they feel called to serve. Their families are equal partners in the sacrifice. They deserve our respect. They don't do it because they hate the enemy in front of them, they do it because they love the family standing behind them.

The tomb of the unknown soldier at Arlington Cemetery is a reminder that many have no idea where their loved ones lay. War is ugly. Remains are not always reclaimed and returned. Pausing to remember those who made the ultimate sacrifice is good.

Veteran's Day is a chance to say thank you to those who show up when disaster strikes, like floods, earthquakes and hurricanes. They build walls of sand when flooding threatens. They rescue those caught in the middle of unexpected disaster zones. They value our freedoms and put their lives on the line to protect our way of life.

There is no greater love than to lay down one’s life for one’s friends. -John 15:13

Today, I’m grateful for those who serve.