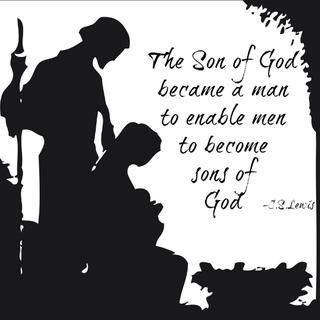 When I go to buy Christmas stamps, I want the religious stamps to include Joseph. So often, it is just mother and child. The older I get, the more it bothers me when Joseph's role is downplayed.

Joseph taught us so much about what it means to love an adopted child like your own. He taught his first born son his carpenter's trade. He put his future and life on the line to save his wife and child. He had to trust God, just like Mary. Maybe even a little more. She had the evidence growing in her womb. He had to trust what the angel and Mary said was true.

Joseph was there for the birth, the shepherd and the Wisemen. Mary pondered the wonder in her heart. Joseph had a family to protect. He was just learning his role as "husband" and now he was to be a father, too.

People counted the months from their marriage to the child's birth. People talk. They did then. They do now. The looks and whispers did not keep Joseph from embracing the child and his wife. The three of them were in it together.

I am grateful for the courage and the love Joseph poured into his little family. I know it wasn't easy. Love is rarely easy... but it is always worth it.

"The Son of God became a man to enable men to become sons of God." -CS Lewis

And a carpenter became his earthly father who would teach him all about wood and nails. Then, Jesus would prove the real power of wood and nails when he chose the cross to save us.

Today, I am grateful for Joseph.