Daily Gratitude Year 9-Day 150: Today, I am grateful for a day to remember freedom isn't free.

Memorial Day is more than a day off to grill, fellowship with family and take in the easy, breezy days of late spring. It is the day we pause as a nation to remember and honor those who gave all for their country, the families and their God.

"Greater love has no one than this, that someone lay down his life for his friends." -John 15:13 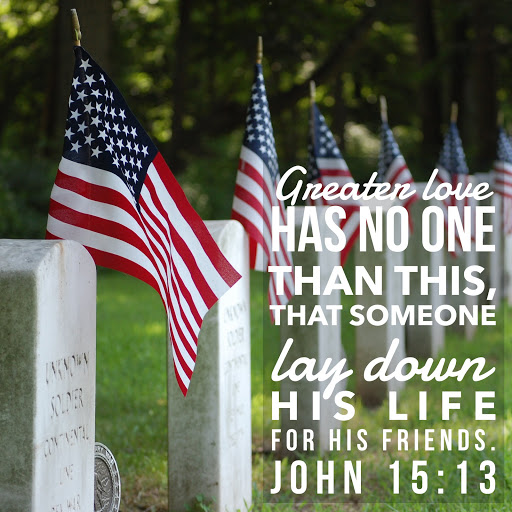 My sister died while serving in the US Airforce. She was stationed in Okinawa, where she met and fell in love with her Marine. They had saved leave time to come home and marry. An undiagnosed heart defect turned wedding plans into a funeral. Instead of wedding tulle and bridal veils, it was an honor guard and the folding of a US flag.

I know the flag means different things to different people, but where I grew up, we stood, covered our hearts and said the pledge. Our elders taught us to respect Old Glory, not because she was perfect, but because she was a reminder of the best of us and the best in us. The brave ones who are willing to protect and serve, not without fear... but because some people are worth dying for.

The flag never meant more than the day it covered my sister's casket. They carefully carried her to the grave and reverently folded it into the shape of a triangle to hand to Mama. Dad somber by her side. Then, the gun salute. The haunting sound of the horn playing "Taps". The memories feel fresh at times, even 25 years later.

Because she served her country, her last year and a half were spent far, far away. Still, in the Air Force and on Kadena Base, she found happiness in her work, in her service and in the relationships she built there. She found ways to be salt and light, as we heard the stories of her compassion and kindness.

We remember the soldiers, some barely more than boys, who stormed the shores at Normandy on June 6, 1944. Hitler had to be stopped. The Normandy invasion began to turn the tide against the Nazis. They were willing to sacrifice all. Some died in battle. Some died of disease due to the horrid living conditions. Others died in POW camps, suffering and hungry.

We remember those who served in Korea and Vietnam, too. They knew freedom wasn't free. We don't celebrate wars. We pause to remember the sacrifice of those who died protecting freedoms we often take for granted.

“Silence in the face of evil is itself evil: God will not hold us guiltless. Not to speak is to speak. Not to act is to act.”― Dietrich Bonhoeffer

They did not face evil in silence.

Today, I am grateful for a day to remember freedom isn't free.