Some 'Splaining To Do 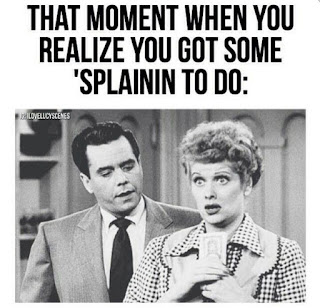 I suppose the word "accountability" would be the perfect choice instead of "Some 'splainin' to do!", but I grew up on reruns of the "I Lucy Show".

Ricky Ricardo (played by Desi Arnez) was Lucille Ball's husband in real life and on the show. The show's humor often revolved around the trouble Lucy would get herself into while Ricky was trying to make a living in the music industry to support them as a popular band leader and entertainer.

Lucy was always plotting ways to become a star, despite a lack of talent. Mayhem followed her wherever she went.  Ricky's reoccurring statement was "Lucy, you have some 'splainin' to do!" in a thick accent that echoed his Cuban-American heritage. And Lucy would try to explain how her perfect plan had failed. It was never "her fault". She would be full of remorse and excuses. Still, America found Lucy lovable. The show aired from 1951-57, ending almost a decade before I was born. It is still in re-runs.

My favorite line and one we would hear around the house growing up was "Lucy, you have some 'splainin' to do!" Funny, but that phrase made its way into the home the Love of my Life and I have made together. It's a great line. It says, "I know you did something and I am curious about the explanation behind the behavior." It is a tension breaker and it makes us smile. The love was never in question in "I Love Lucy" but her actions often needed some explaining.

This passage made me think about Ricky Ricardo's call for an explanation from Lucy.

It is a scripture that causes us to pause. It should. The Lord knows our hearts, but we will be called upon for clarification. Confession is good for the soul. God requires it, not because he is in the dark about anything we've done, but because we need it. We need to lay down our burdens in the form of confession. Asking forgiveness is how we humble our hearts before God. He requires us to humble our hearts. The scriptures are clear on that note.

A God who loves us enough to carry our burdens and cover our sin debts isn't going to leave us or forsake us... even when we have some "splainin" to do. In those most broken moments when our best laid human plans have failed and landed us in a mess, He waits for us to return to his arms of safety, support and unfailing love.

Today, I am grateful for some "Some 'splainin' to do!"